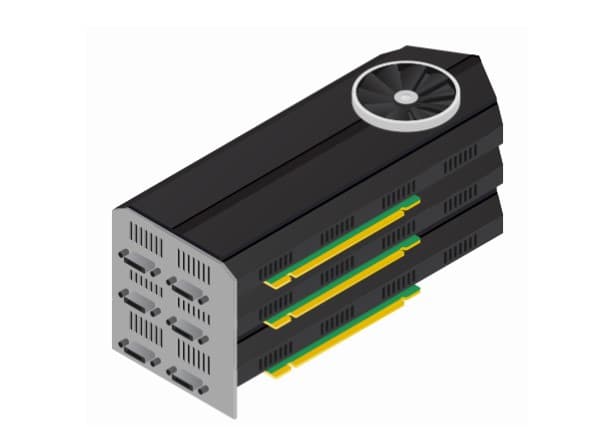 Only in Rocky DEM can you combine the processing power of several GPU cards to accelerate your simulations, enabling you to work with higher volumes of data in less time.

Rocky DEM’s unique ability to utilize one or more GPU (Graphics Processing Unit) cards on the same motherboard greatly speeds up the computational time and also allows for large-scale simulations involving tens of millions of particles.

How does it work?

Large-scale DEM simulations with millions of particles use huge amounts of hardware memory. CPU memory can be quite expensive and simulation performance can vary quite drastically.

A single CPU or GPU has a limited amount of memory, and the particle count that can be handled is still restricted to this memory only.

The multi-GPU solver in Rocky DEM, however, overcomes this memory restriction by efficiently distributing and managing the combined memory of two or more GPU cards within a single motherboard. 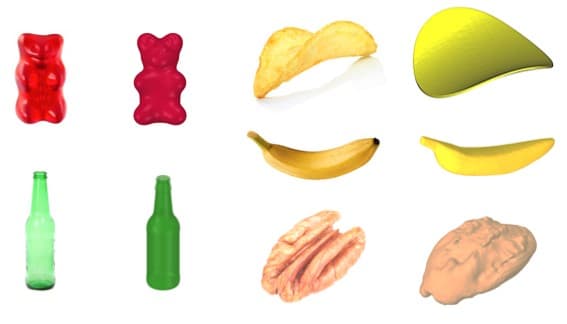 Rocky DEM allows modeling of accurate particle shapes which includes custom 3D bodies, 2D shells and fibers which can be made rigid or flexible.

Set up and simulate the dynamics of a large number of fibers, depicting behaviors such as flexibility, deformation, and inter-fiber interaction as well as the effect of fluids on fibers through coupled simulations with Ansys Fluent.

Open 3D objects made by joining two-dimensional surfaces to create an empty container of a thickness that you define—such as a bottle or box. Because they contain no interior volume, the mass of a shell particle is much lower than a similarly shaped solid particle.

Rocky DEM is able to simulate closed 3D whole or perforated shapes of full interior volume composed of geometry triangles with at least some inward facing components. In this way, you have a new horizon of possibilities.

Explore even more possibilities with Rocky DEM 3D simulation of whole or perforated of full interior volume composed of geometry triangles with no inward facing components.

Enable your equipment components to move freely in response to forces such as particle contacts, gravity, and more.

Rocky DEM allows you the freedom to configure complex geometry movements by enabling you to set up as many translations, rotation, vibration, swinging, crushing, and free-body motions—and combinations thereof—as you desire within your simulation.

So whether you want to prescribe exact movements, or have your geometry components move freely in response to outside forces like particle contacts and gravity, Rocky DEM has your complex motion needs covered.

And what’s more, Rocky DEM enables you to define these multi-body dynamics within the program itself so there is no need for a third-party solution.

Currently, two kinds of breakage models are available in Rocky DEM: The Ab-T10 model and the Tavares model. Both models preserve both mass and volume.

Rocky DEM works with both a fracture subdivision algorithm and a breakage energy probability function, which itself is based upon a well-established model in the industry (JKMRC Ab-T10).

This breakage model treats every particle as a single entity that can be broken into fragments instantaneously based upon the breakage force and/or energy values defined.

The Tavares breakage model is an extension of Rocky DEM’s original Ab-T10 breakage model. It has been validated via single-particle testing and the results have been documented in a number of peer-reviewed journal publications over the last 20 years.

This model focuses on fracture by low-energy stressing. This event is relevant for the simulation of a number of unit operations in particulate materials processing and handling, where particles are often subject to a complex series of loading events.

Tavares’s breakage model describes the progressive growth of crack-like damage that ultimately leads to the fracture of a particle under stresses significantly lower than those required for breakage in a first event.

Being fully integrated within Ansys Workbench allows Rocky to: 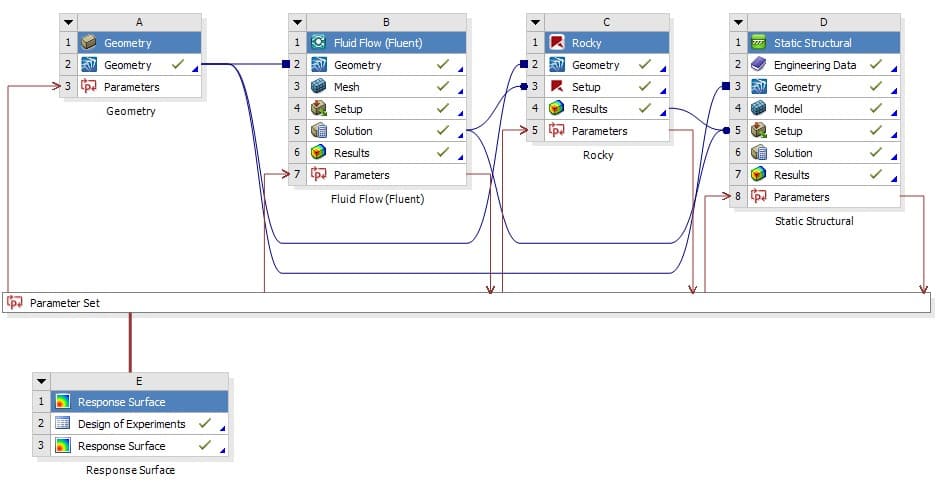 Rocky DEM enables you to collect and analyze energy spectra as a useful alternative to the often computationally intensive breakage modeling solutions.

This feature collects the energy statistics of particle collisions to predict breakage and attrition rates in a graphical format, and is often used to help analyze continuous comminution processes such as grinding mills.

While missing the high-impact 3D visuals provided by traditional breakage modeling, energy spectra produces actionable results faster by eliminating the computational costs of having to calculate and visualize each individual broken fragment.

Rocky DEM also can be used also as a tool for the preparation of abrasive wear of solid surfaces and there are two major ways you can use Rocky DEM to gain an understanding of how your geometries will wear over time.

One way is by enabling wear surface modification, which changes the physical appearance of the geometry as the simulation progresses.

A second way is to view a color map of the surface intensity. 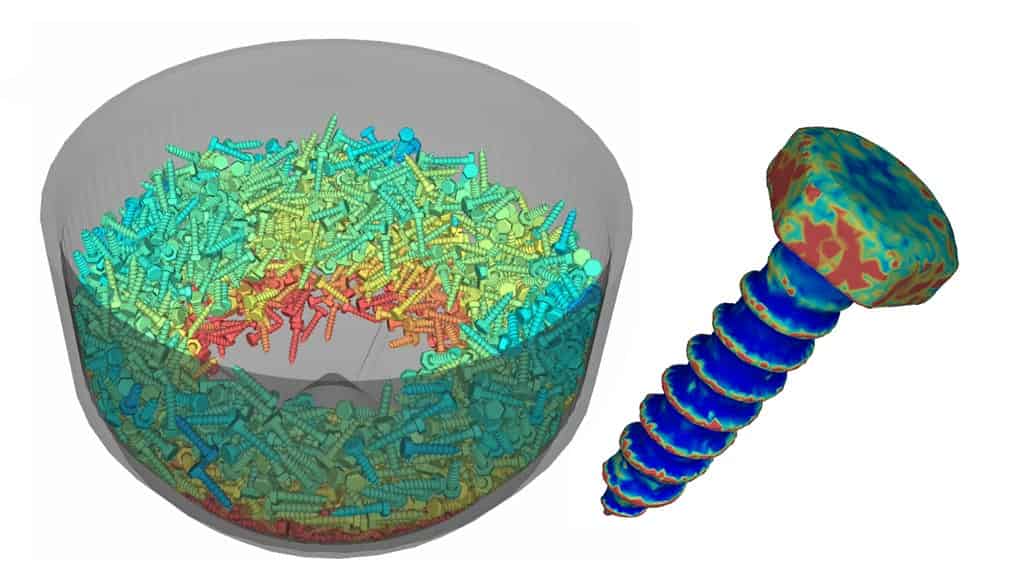 The visualization of collision statistics is a key feature in Rocky DEM. During the simulation, relevant collision data is stored between two consecutive output time levels.

Then, this data can be displayed graphically on the surface of a representative particle, using a conventional field representation with a color scale.

For certain particles–specifically single sized, unbroken, rigid polyhedron or custom polyhedron shapes (either concave or convex)–you can choose to have collision data between two consecutive output time levels collected by Rocky DEM during the simulation. 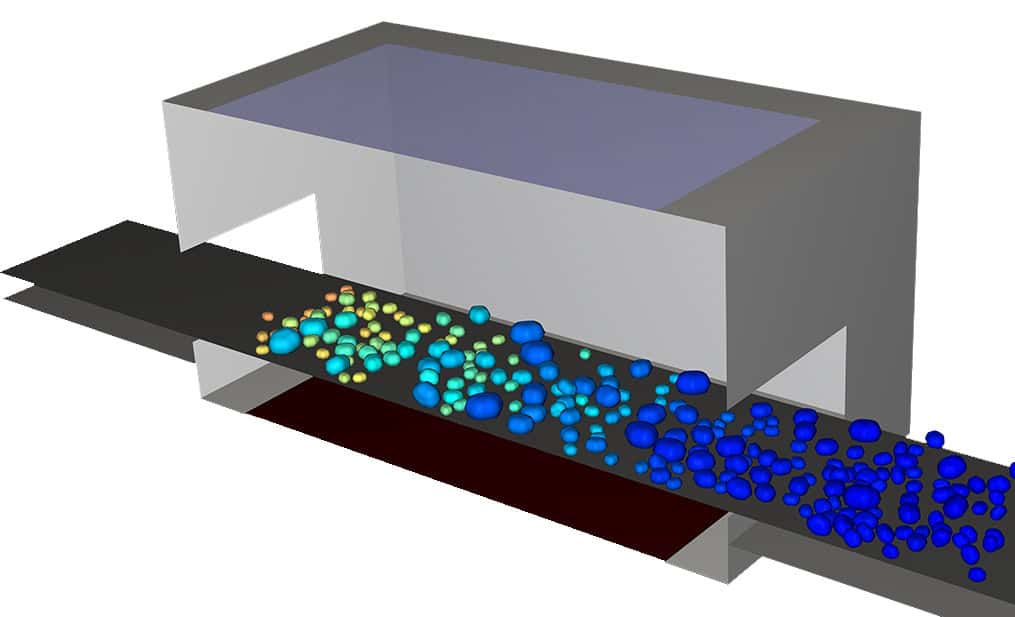 If you want to observe how particles are affected by temperature changes brought on by the heating or cooling of other items around it, you may set up your simulation to model thermal properties.

When used with CFD Coupling methods, it can also simulate convective heat transfer between particles and fluids.

The calibration of the material interaction parameters is a key step of all projects. At least friction and restitution coefficients between particles and particles and boundaries have to be adjusted in order to reproduce the bulk flow behavior. When extra forces come to play, such as adhesion forces, additional parameters have to be selected.

The integration between Ansys Optislang and Rocky DEM can boost the calibration process by combining the powerful parametric modeling capabilities of Ansys Workbench with the robust design optimization (RDO) methods of Opstislang.

By using optiSLang plug-in, the input parameters selection and variation are automatic, based on sensitivity analysis and meta-modeling techniques, reducing the number of cases to be run and allowing the user to confidently adjust the interaction parameters for the project.

Please specify "Source Advantech, Jsc." or "According to www.advantech.vn" if you want to disseminate this information