In order to predict the flush performances of siphonic toilet products before mass production, a numerical simulation for a three-dimensional unsteady multi-phase flow in the flushing process of a wash-down toilet is carried out by using FLUENT software.

The toilet usually consists of a water tank, a rim hole, a bowl, and a trap way. There are two large flow paths in the toilet, which are channels for discharging water to the rim hole through the rim and a channel for supplying water directly to the trap way through the inverted U tube shape. Flow distribution through the two channels is a very important factor determining the washing power of the bowl and the siphon. When the flow rate through the rim is low or the water velocity is low, the cleaning force of the bowl is lowered. On the other hand, when the flow rate to the bowl is increased through the rim, it is difficult to satisfy the conditions for generating the siphon effect on the trap way. Therefore, proper flow distribution between the two channels of the toilet is important for optimizing the performance of the toilet. 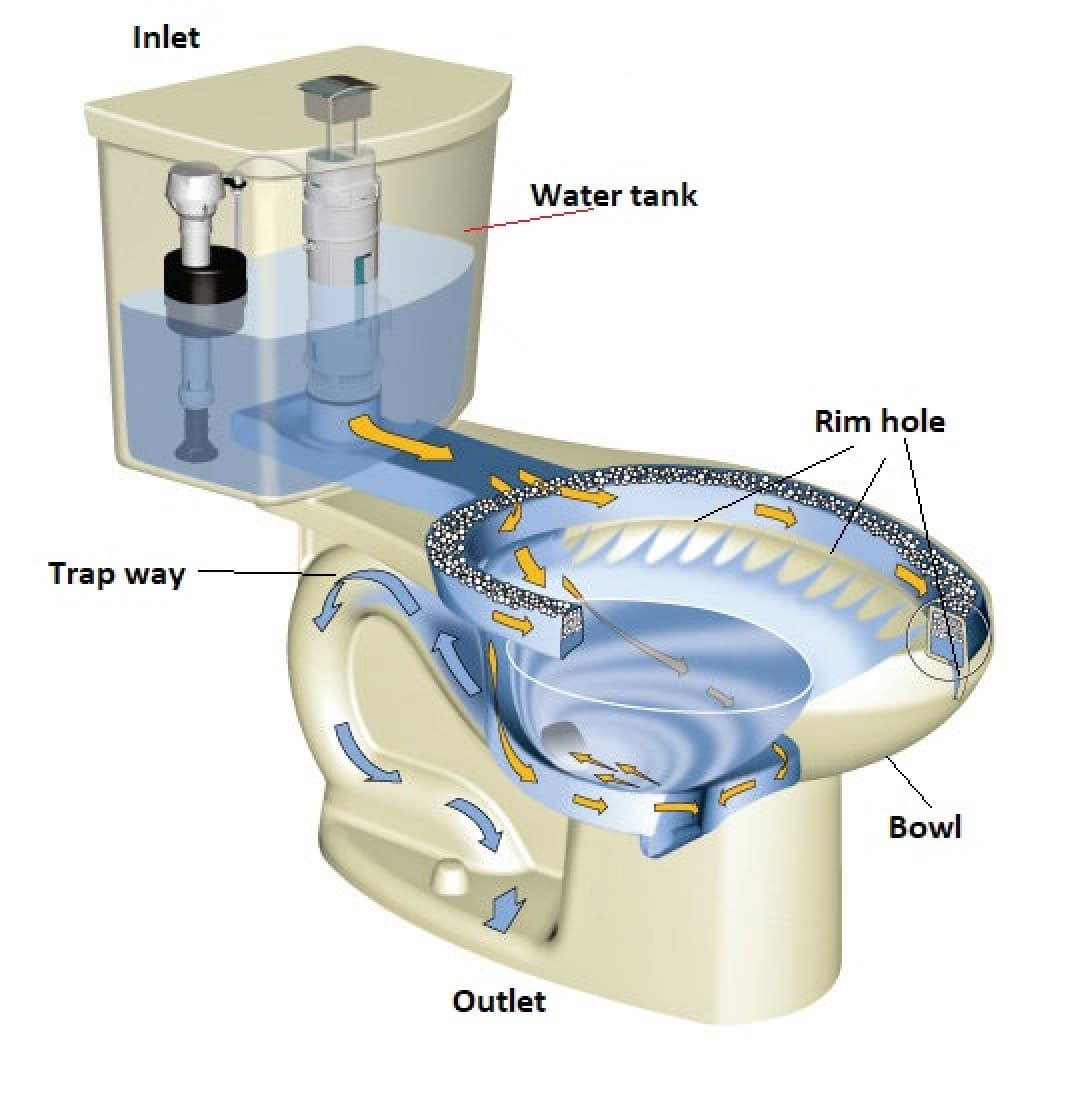 In order to predict the flush performances of siphonic toilet products before mass production, a numerical simulation for a three-dimensional unsteady multi-phase flow in the flushing process of a siphonic toilet is carried out by using the FLUENT software.

CAD geometry of a rim-jetted siphon bowl commercial toilet was processed and simplified, then this geometry was appropriately discretized with ANSYS Meshing. It was an unstructured tetrahedral mesh with a simple refinement close to the walls

The initial conditions were set similar to the normal operating conditions. The tank is filled with water; while 0.8 liter of water partially fills the siphon and the bowl; the remaining of the computational domain is filled with air. In the beginning, the water in the tank flows freely to the bowl due to the gravity.

The flow inside a toilet was assumed to be a two-phase problem, air and water. The gravitational effects are taken into account because of its importance in the operation of the toilet. Both air and water were considered incompressible fluids. The Coriolis phenomenon was not taken into account, it means that the toilet was located in a position of latitude 0 degree. In this case, the flow inside a toilet was characterized in order to obtain contours of pressure, the water volume of fraction and velocity fields. 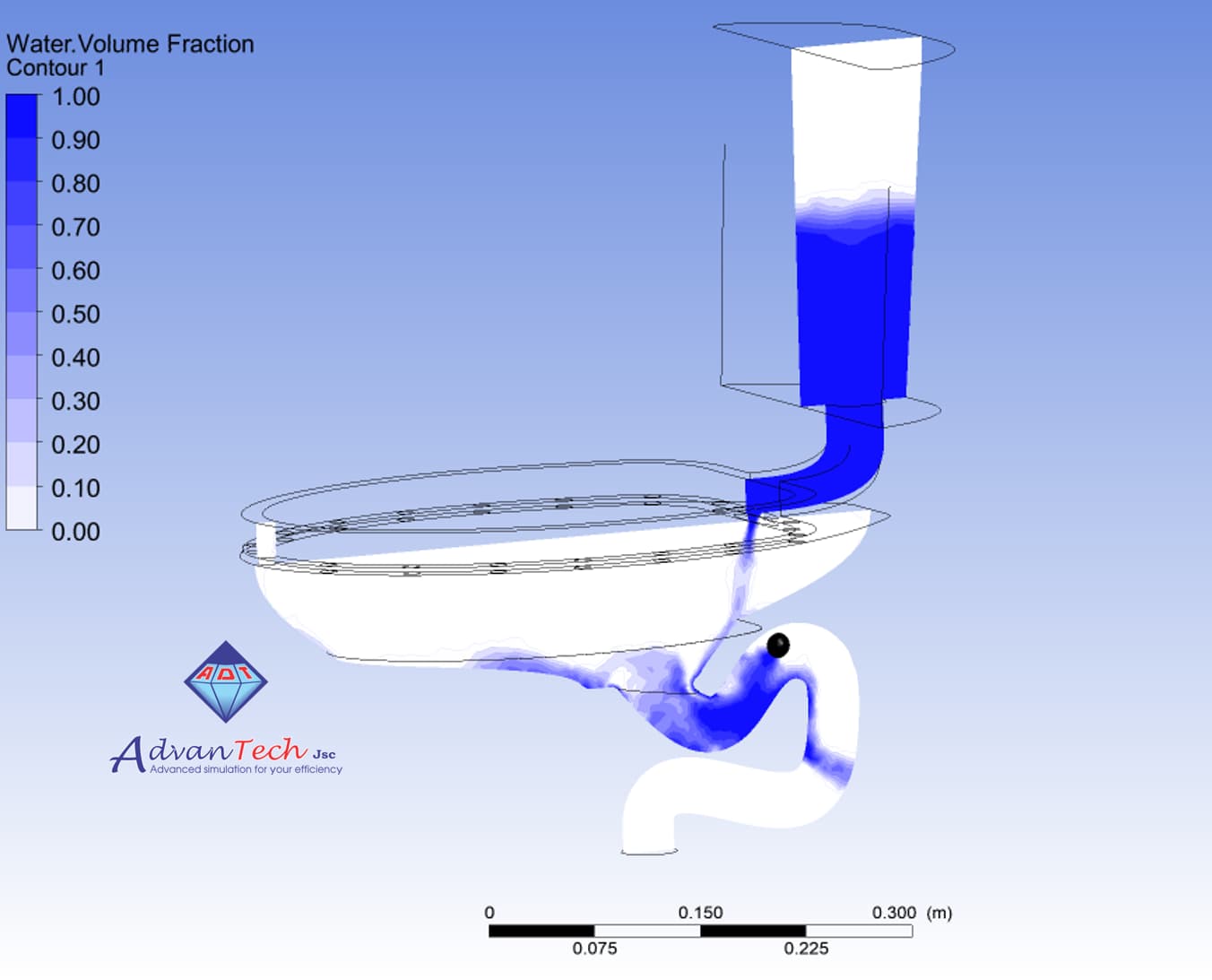 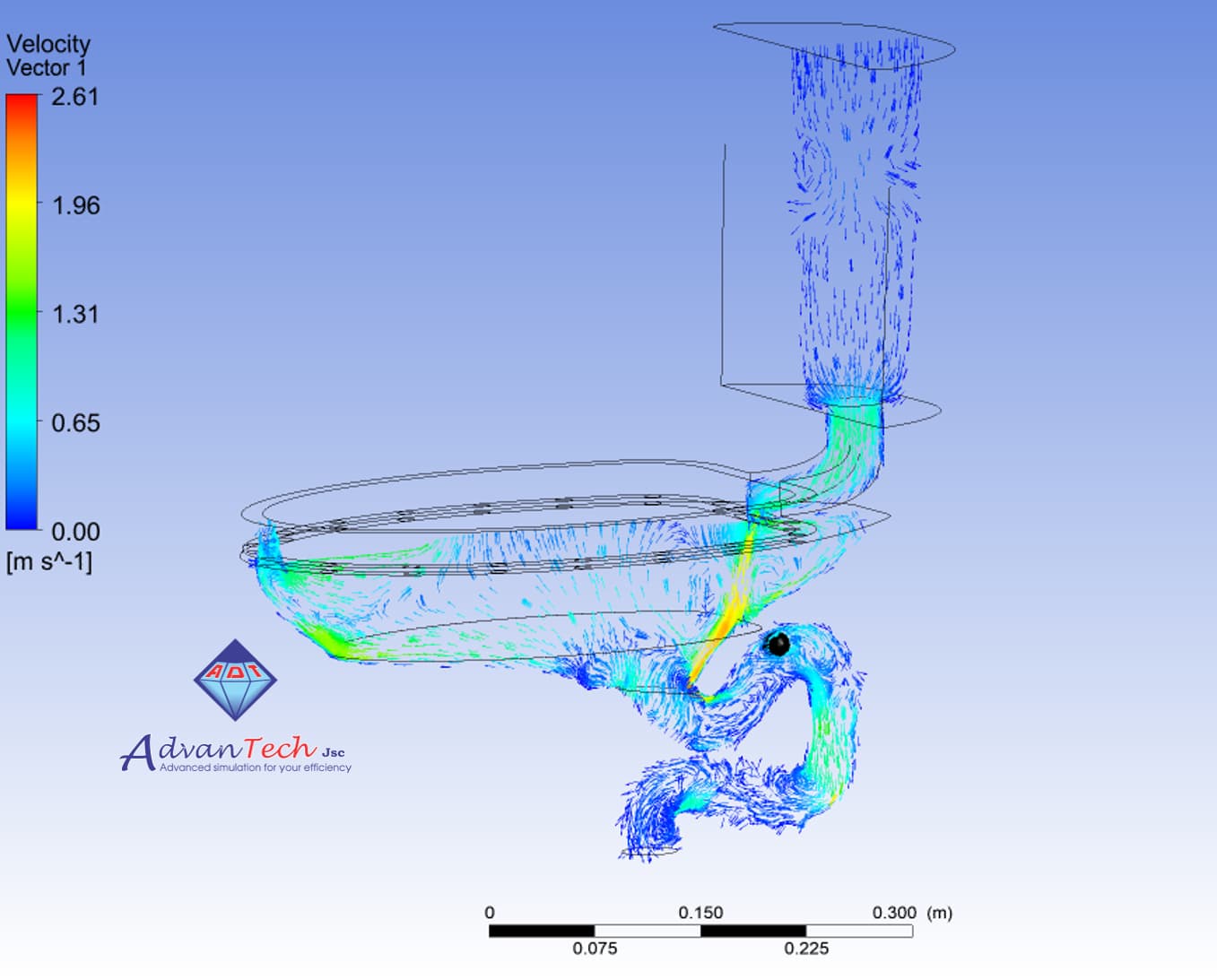 The biggest challenge is to simulate the behavior of fake poop in the toilet. We used a combination of advanced solutions & solvers from Fluent: Dynamic Mesh or Overset mesh, six Degree of Freedom (6DOF), User-Defined Function and Contact Detection. Six degree of freedom (6DOF) solver computes external forces and moments (such as aerodynamic and gravitational forces and moments) on objects that undergo rigid body motion. Due to the complex motion of the fake poop, we need to use an UDF. The UDF is written by the C programming language and using the DEFINE_SDOF_PROPERTIES macro to determine the specific properties of moving objects, including mass, moment and products of inertia.

When the water is flushed out, the fake poop will move along with the water. A dynamic mesh solver is needed to represent the change of position of the fake poop and it will contact with the siphon tube during movement. Contact detection solver is used to detect if the computed mesh motion will result in contact with other surrounding surfaces.

Please specify "Source Advantech, Jsc." or "According to www.advantech.vn" if you want to disseminate this information